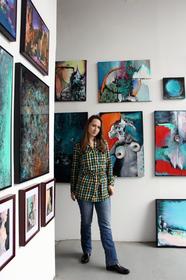 SANDRA VUCICEVIC is a New York based multidisciplinary artist of Serbian origin. She holds a B.A. in Studio Art (Painting) from Hunter College, CUNY, and a law degree from the University of Belgrade, Serbia. Vucicevic’s work spans from painting and drawing to conceptual projects in the field of audience-participatory performance. In the beginning she was also involved in poetry writing, and her early poetry and drawings were published in "The Gate" (serb."Kapija") in 1995. Sandra’s current work includes a large body of abstract paintings which explore her notion of Reality and clash between the visions of the Known and the Unknown. Her art has been part of many exhibitions, and can be found in private and public collections in the United States and abroad. In 2013, she was awarded a grant from the Queens Art Council for her performance "BRUSH-VOTES - CREATING THE CREATOR". In 2015, her project "YOU ARE WHAT YOU EAT" was chosen to represent Serbia at the World Expo in Milan, Italy. Most recently, she received the 2018 SU-CASA artist-in-residence award by the New York City Council.